An Unknown Compelling Force 2021 is a documentary movie by Liam Le Guillou. The film talks about the truth of Russia’s greatest unsolved mystery, the Dyatlov Pass Incident, is uncovered in this compelling documentary.

An Unknown Compelling Force movie is a documentary that is not given a rating, but I would give it the rating of it are simply because there are some very gruesome images and descriptions of deaths based on a true story.

So in a nutshell, if you’re fascinated by mysterious, true stories, you’ll be intrigued to learn about this baffling story about nine students who were found dead for unknown reasons in the Russian wilderness in the middle of winter.

And An Unknown Compelling Force is the true story of did love pass incident known as Russia’s greatest unsolved mystery.

In 1959 a group of student hikers was attempting a very difficult winter expedition in the remote Ural Mountains of Russia. When an unknown event led to the mysterious deaths of all nine students.

When the team failed to report back search parties led by the Soviet government and fellow students uncovered the grisly remains of the hikers found a mile from their shredded tent.

They seemingly fled into the freezing temperatures without their winter clothes on and boots and sometimes gloves. Which is so bizarre, right?

Adding to the mystery, many of the bodies had suffered brutal and inexplicable injuries, and some even showed traces of radiation.

The case was actually closed by investigators at the time stating that the hikers died from, quote, an unknown, compelling force.

So for more than 60 years, the story has been shrouded in mystery and conspiracy theories, suggesting everything from UFOs to murder to a government cover-up.

A British adventure filmmaker Liam Leggio travels under the radar to Russia in search of answers, braving all kinds of dangerous conditions and hundreds of kilometers and some polar conditions.

The documentary team attempts to reach the very location of the incident, a place the locals call the dead mountain. That does not sound like a fun trip to me.

This documentary film interviews Russian investigators, a former Moscow Times journalist and friends of the hikers to uncover the truth.

The film also speaks to experts in the US, including a former FBI agent and the former Marin County coroner, to finally reveal the stunning truth of the Dyatlov Pass incident.

I watched this movie and I still can’t pronounce that name correctly. All right. Let me dove into the things that I really liked about this documentary.

First of all, in order to make some of the static images appear more interesting, there are some animated snowflakes blowing across the frame occasionally.

But there are also some really interesting and creative transitions that provide a lot of action to some of the black and white images.

Some of the Russian speak English pretty well, but there are also subtitles where people are being interviewed who don’t speak English.

All the conspiracy theories and the facts are presented. Some of them are debunked while others remain uncontested.

You get to learn about each of the hikers and their personal lives and their background story a little bit, reminding you that these were real people and not just names on death records.

One of the hikers in the group actually got sick and had to return back without finishing the trip. So obviously he wasn’t killed or died.

It was touching that he wanted to be buried with his friends when he died. And he only died just a few years ago, he passed away without ever finding out what really happened to his friends.

It’s really impressive to see all of the research and the angles that the director explored to make this film and to try to get to the bottom of this mystery.

You really do feel his passion as he uncovers one lead and moves on to the next. He puts himself in very dangerous situations in an attempt to discover the truth.

All right. So there were a few things that I didn’t really like or thought could have been handled differently.

First of all, sometimes it’s really hard to understand what’s being said because of some of the very thick Russian accents of the people who are being interviewed.

And then ultimately, the ending is kind of frustrating. I don’t want to give you any spoilers, but I’ll just say that.

There are some fantastic pictures in black and white. The documentary is also in color as recent footage is being added to the archive.

Now, let me give you some tips for parents. As I mentioned, the movie is really not appropriate for children to watch because of the gruesome images and the description shown of dead bodies and the violent condition they were left in.

Also, kids will probably be a little bit bored and maybe even confused as they try to follow all of the facts and the trail of the mystery.

So some themes that were illustrated in the documentary are passion, both for the hikers as well as the filmmaker.

Determination, both for the hikers and the filmmaker. Truth, conspiracy theories, fact versus fiction, friendship, man versus nature, and culture and customs that come into play quite a bit.

One of the interesting lines early on in the movie the director says I don’t like we don’t know as an answer, and that’s what propels. And he explains how he sort of came across this story on the Internet and he wanted to know what happened to these people.

Then also there’s a little quote by the director when he says, Have you ever fallen down the rabbit hole of an Internet mystery so hard you dropped everything and set off around the world to find the truth?

Well, neither had I until I discovered the Dyatlov Pass incident, and it changed my life forever. So interesting.

So I think that the documentary was very well done and it keeps you wondering and guessing as more and more evidence is presented and then debunked and then new information is brought to light.  It really does feel like a puzzle right there on the screen taking place.

So I am going to give An Unknown Compelling Force Movie a B-Minus. 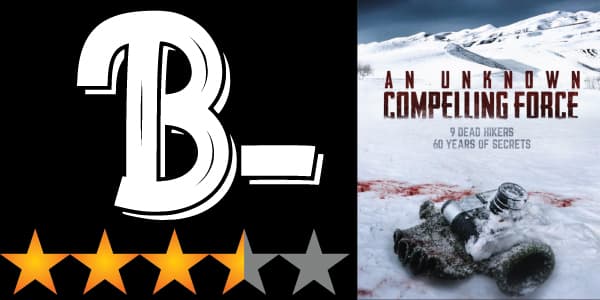 If you got the chance to watch An Unknown Compelling Force Movie, comment with your thoughts about this film.

Guys thank you so much as always for reading the review of An Unknown Compelling Force Movie. See you next time.

Check out the trailer of the new Documentary movie An Unknown Compelling Force.