A Quiet Place Part II is an American Mystery And Thriller, Horror film by John Krasinski. It is one of the best horror movies this year.

A Quiet Place Part II is directed by John Krasinski once again, just like the first one, except this time he has a sole writing credit. The last time he shared that credit with Beck and Woods. This time it’s all Kazinsky.

Following the events at home, the Abbott family now faces the terrors of the outside world. Forced to venture into the unknown, they realize the creatures that hunt by sound are not the only threats lurking beyond the sand path.

The first quiet place was so good it has become the go-to reference whenever anyone talks about high concept horror.

Any time I’ve ever tried to pitch something that I’ve written to a producer or to an executive or to a studio, a quiet place inevitably will get brought up at some point during the conversation.

And so to make a sequel to that, I can imagine it was a daunting task. And I thought this film was excellent.

The first film was very tense and very suspenseful all throughout the concept of monsters that hunt by sound and you have to be very quiet was a genius idea for a horror film.

And that’s really all you need for a film like this. It’s so execution based and it’s entirely about tension. And Krasinski pulls off what I think is one of the better horror sequels I’ve ever seen.

I think it’s really, really good. I loved everything about the film. This is exactly the kind of movie that I wanted it to be. And it surprised me. It gave me ideas I didn’t expect.

The performances were once again magnificent. Emily Blunt can do no wrong, but Millicent Simmonds and Noah Jup are both fantastic, especially Simmons in a very featured role.

And I only watch the teaser for the movie. So I didn’t realize that and Murphy was going to have a substantial role. I knew he was in the movie, but he gets a lot in this movie. Like he’s front and center character and I love him and he’s phenomenal, everyone is.

And one of the biggest reasons the actors are so great in both of these movies is because they rely so much on silent communication and visual storytelling.

And so that’s like meat and potatoes for an actor. To not have to communicate everything through dialog and just simply have Luke’s sign language and body language and that kind of thing can be very exciting for a great actor. And they’re all so, so good in the film.

But honestly, the star of this film is Kazinsky. This is a masterfully directed movie. He should be incredibly, incredibly happy with this film. This was shot in a thirty-five-millimeter film. And you can fucking tell.

Every frame of this movie looks like the kind of film that excited me when I was a kid. If I had seen this when I was thirteen, it would have been one of those movies that made me want to go out in my backyard with a camera and make films.

He doesn’t treat the monsters like their spectacle. He always frames the spectacle with and the same image as his characters. Very rarely does he just cut to like epic shots of destruction or anything like that.

When it comes to horror movies that pick up right where the last one left off. I always think of Halloween to the original, more of the night he came home.

And if they can pull that off, then you have this great double feature you can always have in the future. And quiet places one and two back to back is going to be like the greatest three hours suspense movie.

I’m so satisfied with Brzezinski’s work here. The opening sequence is easily one of my favorite openings in a horror film ever. I talked about this in my original review of Quiet Place, and I don’t really consider this a spoiler because it is in every single trailer.

Showing day one of this event would be a completely different film. It would be mass hysteria, whereas cutting too much later you allow the characters to understand the world and they know how to survive, and they kind of get the rules now.

This film’s opening sequence is day one and it’s fucking riveting. Krasinski, please continue to make films. It just I mean, do whatever you want, but you’ve got to make more movies like this, man. This was everything I wanted it to be.

I was so satisfied with the character work. The suspense is always really white knuckle. The monsters are amazing. Again, he shows them, you know what they look like, but the characters are always in the forefront.

If I really, truly had to pick my brain and be annoyed with myself for thinking this deeply about a film’s potential fellows the only thing I can really think of is that the ending of the film, which I quite like, is not necessarily as emotionally resonant as the ending of the first.

That’s all I can come up with. This film gave me everything I wanted. If you love the first, you’re going to love this one, too.

So I’m going to give A Quiet Place Part II an A. 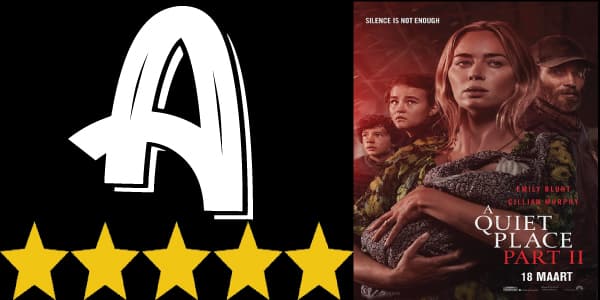 God!!! Watching this movie, I really felt like, OK, this is a theater experience. This is something that I am so glad I got to see in a theater. It was very smart for them to hold off and not release this during covid seeing it in the theater tonight was worth the wait.

A Quiet Place Part II Release Date in Theaters on May 28, 2021. So if you get a chance to see it in the theater, I would highly, highly suggest that.

Guys, thank you so much, as always, for reading the review of the new  Drama, Horror film, A Quiet Place Part II. Look forward to more reviews very soon. See you next time.

Check out the trailer of the new  Drama, Horror, Sci-Fir film, A Quiet Place Part II.